**Audiences and critics raved about the world premiere of My 80-Year-Old Boyfriend at Merrimack Repertory Theatre.**

1 W; 0 M
In this delightful new one-woman musical, Charissa, a quirky, twenty-something actress, meets Milton, a quick-witted, eighty-something millionaire who loves Schubert, Shakespeare, and Dallas BBQ. From a chance encounter to the unlikeliest of friendships, Charissa discovers there’s much she can learn from her surprising new companion. Based on the true story of performer Charissa Bertels, My 80-Year-Old Boyfriend reveals the thrill of chasing a dream, the power of living in the now, and all that can happen when we let ourselves say “yes.” 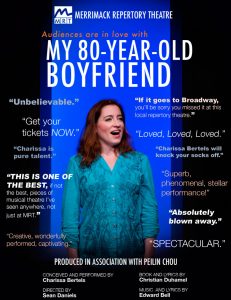 The Love Left Behind